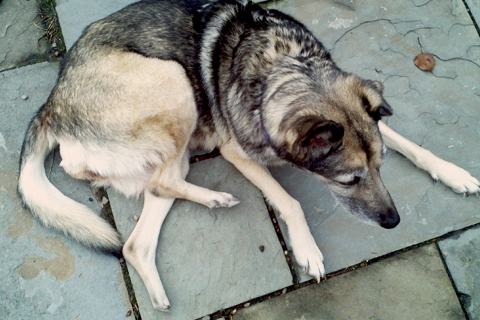 It was completely by accident that I came across Belle on Pet Finder and fell in love with her face. Her soulful eyes said so much, hinting at a life that had been filled with challenges and sadness. The rescue group was out of Mechanicsburg and in her write up they mentioned that she had some issues with her back feet, she was missing one and part of the other.

When I spoke with her foster mother, I was told that she was found wondering on the streets in Lemoyne, their guess was that she was 9 or 10 years old. After several conversations, arrangements were made for her to bring Belle to the house and do the home visit. The understanding was that as long as I passed the home inspection and Belle got along with the other dogs in the house, she would be in her forever home.

The day finally came and this beautiful ball of fur (all of my previous dogs have been greyhounds – very little hair compared to a shepherd/husky mix) came tottering up the sidewalk. We all sat down together and let the dogs check each other out and her foster mom started telling me more about Belle. She was Lyme positive and had not been treated; she was deaf; wasn’t sure how good her eyesight was; she had not been spayed; and she had been kept in a room by herself because the other dog in her foster home would attack her.

Any normal person would probably have run away, but I knew that Belle was home and besides I was home too!

For the first month or two, she spent all of her time in my bedroom, did not interact much, or spend time with the rest of the family. Slowly, she started coming into the family room and staying with the gang. Later, she followed me everyplace. Wherever I was, she was right there with me. She loved belly rubs and to be brushed, her coat became so soft, shiny and beautiful.

Companion Animal Hospital treated Belle for the Lyme disease, spayed her, and determined that her feet are due to birth defects. Belle had some additional challenges once she came to me. She had several seizures that were fairly well controlled with medication, had more issues with weakness in her hips and back legs, and waked much more lopsided than what she once did. She didn’t go up and down the stairs any longer but enjoyed walking in the grassy yard.

Sadly, Belle faced additional challenges and has recently passed away. She and her owners were an inspiration to the staff at Companion Animal Hospital. To witness the compassion of taking on the challenge of adopting an older dog with multiple health issues was heartwarming. And in a short time, Belle in return gave a tremendous amount of love to her owners. She found her “forever home” with them and she will forever be in our hearts. 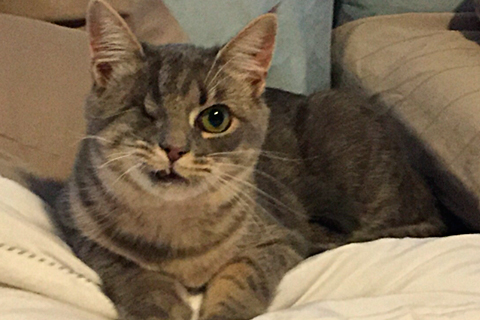 Violet's owner was working outside one day when they noticed a car drive by. As he looked over to his neighbor's driveway, he saw a tiny kitten scrambling for cover. It disappeared into the shrubbery while he walked over. He thought something looked funny about its face, but he was only able to catch a glimpse before the kitten was gone. It certainly didn't help matters that there had been a recent snowstorm that left over two feet of snow.

The next evening another member of the family was outside closing the chickens safely in their coop when she heard a tiny meow coming from beside the corner of the house. It was almost dark out so she couldn't see anything, but she kept hearing it. She called, "Here, kitty, kitty," and that little kitten leaped through the snow about 20 yards and climbed right up her boots and leg. She took her into the coop, turned the lights on, and could tell something was wrong with her face. The kitten was so scared it wouldn't let her look at it. They warmed her up, tried to feed her, and kept her safe until they could get her veterinary care.

Violet had her jaw broken in two places and her eyeball had "popped" out. She spent a few days at the hospital and underwent surgeries to pin and wire her jaw, and to remove her eye. Although we will never know for sure if someone in the car that drove by tossed her out, the family that Violet found knows she is a "keeper". She is a tough cat who has won their hearts.

Violet is one of the many “unwanted” cats we frequently hear about. The shelters are often full and cannot accept more cats. Violet is a terrific cat and has grown into a beauty. Although the last thing this family was looking for that day was another pet, they ultimately found one more to love.